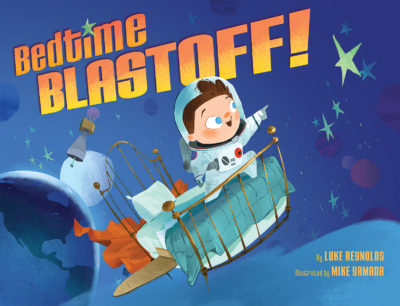 For little boys who love construction vehicles, race cars, and fire trucks, this is the perfect bedtime story to get them strapped in and ready to blast off to bedtime!

Debut author Luke Reynolds captures this boy-themed bedtime adventure with perfectly simple but poignant text, while debut illustrator and animator Mike Yamada brings it to life with his awesome ability to transform a bed into a rocket, a plane, and even a pirate ship!
Luke Reynolds

Luke Reynolds has been a teacher for eleven years in public schools in Connecticut and Massachusetts, and he also teaches Adult Education courses in York, England. His love of writing began when he was five years old, with a story called Life on Mars and Pluto about two aliens who must save Planet Earth. Today, he's still passionate about writing. He's also a huge fan of his wife, Jennifer, and their two sons.

Mike Yamada is the illustrator of Bedtime Blastoff! He works as an animation production designer based in Pasadena, California. Mike has contributed to many animated films, including Kung Fu Panda 2, How to Train Your Dragon, and Big Hero 6. Visit him online at myamada.com.