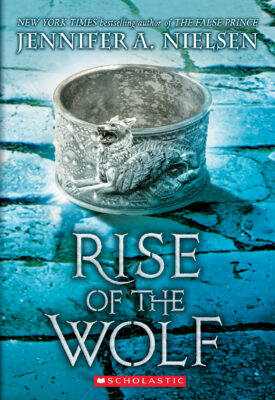 Nic may have escaped enslavement in the mines outside of Rome, but his troubles are far from over. The Praetor War -- the battle to destroy Rome from within -- is in full force, and Nic is caught in the crossfire. The secretive Praetors are determined to unlock a powerful amulet -- one sure to bring the empire to its knees. Worse, the Praetors believe Nic holds the key to finding this amulet, and they will stop at nothing to steal it, even if that means harming the people Nic holds most dear.

When the Praetors capture Nic's mother, Nic knows he must do anything to save her. He challenges the Praetors to a chariot race. If he wins, they will release his mother. But if he loses, he must hand over a magic that will certainly bring about the end of Rome -- as well as his own life. Can Nic once again harness his magic and gather the strength to defeat his enemies? Or will he lose his mother and bear witness to Rome's destruction? Find out in this New York Times bestseller!
Jennifer A. Nielsen

Still shouting insults, the white-cloaked charioteer tried to force my team against the wall. I calmed the horses with a wave of my hand and urged them even faster, earning some cheers from the audience. I turned to thank the crowd, and then someone caught my attention.
My younger sister, Livia, was in the stands, behind the senators' box. Her golden curls always stood out in a crowd, and they did now, as bright as ever. Still, I was surprised to see her here. Since we had come to Radulf's house two months ago, she and I had never been allowed outside at the same time. Radulf thought it would make us more likely to run. I hadn't gotten far in arguing that with him, mostly because we both knew that's exactly what I'd do.
So why was Livia here now, and on her own? As my chariot came closer, she turned to speak to a woman next to her and I realized it wasn't Livia after all. But for the difference in their ages, it was someone who could have been her twin.
My heart lurched into my throat. Only one other person could look so much like Livia. That was my mother, I was sure of it.