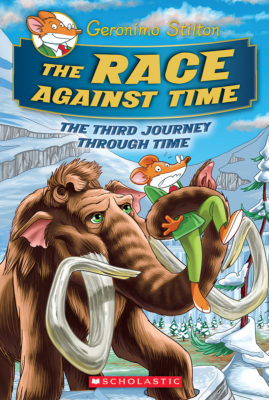 The Race Against Time (Geronimo Stilton Journey Through Time #3)

I, Geronimo Stilton, was so excited to travel on my third journey through time! Professor Paws von Volt had invented a portal to take my family and me to the past.

On this trip, we visited the Ice Age, ancient Greece, and the Renaissance. I encountered wooly mammoths and enormouse bears, wrote and starred in a play, and even helped put a bad guy in prison! But then the portal started malfunctioning -- could we get back to the present day, or would we get lost in time? It was an amazing adventure!
Geronimo Stilton