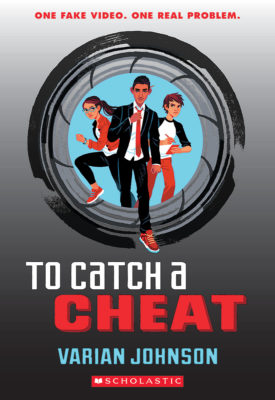 Jackson Greene is riding high. He is officially retired from conning, so Principal Kelsey is (mostly) off his back. His friends have great new projects of their own. And as he's been hanging out a lot with Gaby de la Cruz, he thinks maybe, just maybe, they'll soon have their first kiss.

Then Jackson receives a link to a faked security video that seems to show him and the rest of Gang Greene flooding the school gym. The thugs behind the video threaten to pass it to the principal -- unless Jackson steals an advance copy of the school's toughest exam.

So Gang Greene reunites for their biggest job yet. To get the test and clear their names, they'll have to outrun the school's security cameras, outwit a nosy member of the Honor Board, and outmaneuver the blackmailers while setting a trap for them in turn. And as they execute another exciting caper full of twists and turns, they'll prove that sometimes it takes a thief to catch a cheat.
Varian Johnson

\t\"Tell me, where were you on Saturday evening?\"
\tJackson sat down on the other side of the principal's desk. \"Saturday? Mr. James said the prank happened on Sunday.\"
\t\"Mr. James should focus on security, not plumbing,\" Dr. Kelsey replied. \"No, given the amount of damage, we suspect that the toilets were clogged on Saturday evening, after the boys' basketball practice. The faucets were turned on as well. So I'll ask again--where were you on Saturday between five and eight o'clock?\"
\t\"At the library. Studying.\" Jackson focused on Dr. Kelsey's nose. He told himself not to blink, not to hesitate. \"My dad dropped me off. I checked out books and everything.\"
\t\"Did anyone else see you there?\"
\t\"I don't know. Maybe.\"
\t\"Then you don't have an alibi.\"
\t\"Dr. Kelsey, I promise--I did not pull this prank.\"
\tDr. Kelsey grinned. No. He smirked. \"That's fine. You don't have to talk. I'm sure I can eventually convince Charlie de la Cruz to speak up. Or maybe I'll chat with Hashemi Larijani. Or Charlie's new best friend, Bradley Boardman. It's funny how students start talking once you take away some of their perks.\"
\t\"They don't have anything to do with this.\"
\t\"And you do?\" Dr. Kelsey's face stiffened. \"If you don't confess now, you're looking at a two-week suspension, plus you'll be responsible for repairing all the damage to the gym and hallway floors.\"
\tJackson straightened his tie. This was pointless. As far as Dr. Kelsey was concerned, he was guilty. He was sure the principal would march him in front of the Honor Board today if he could. And Jackson couldn't tell him what he'd actually been doing Saturday night -- not without getting Gaby in trouble too.
\tIt was time to bring in the big guns.
\t\"Can I use the phone?\" Jackson asked, already sliding forward in his chair. \"I need to call my dad.\""