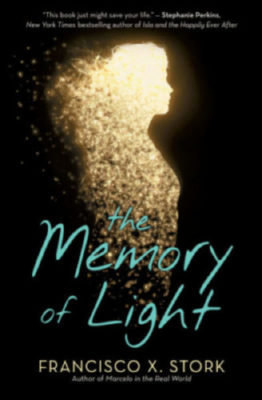 The Memory of Light

When Vicky Cruz wakes up in the Lakeview Hospital Mental Disorders ward, she knows one thing: After her suicide attempt, she shouldn't be alive. But then she meets Mona, the live wire; Gabriel, the saint; E.M., always angry; and Dr. Desai, a quiet force. With stories and honesty, kindness and hard work, they push her to reconsider her life before Lakeview, and offer her an acceptance she's never had.

But Vicky's newfound peace is as fragile as the roses that grow around the hospital. And when a crisis forces the group to split up, sending Vicky back to the life that drove her to suicide, she must try to find her own courage and strength. She may not have them. She doesn't know.

Inspired in part by the author's own experience with depression, The Memory of Light is the rare young adult novel that focuses not on the events leading up to a suicide attempt, but the recovery from one -- about living when life doesn't seem worth it, and how we go on anyway.

\t\"What happened, mi niña? Why you do something so horrible? Something happen in school?\"
\t\"No, no.\"
\t\"Do you miss your mamá? I miss her too. Your mamá wouldn't want you to do this.\"
\t\"I know,\" I say, rubbing my eyes with my hands.
\t\"Who hurt you, mi niña? Tell me.\"
\t\"No one, Nana, no one hurt me. It just hurts inside, I don't know why.\"
\t\"Is it Barbara? Is that what happen?\"
\t\"No . . .\" I have no answers to these questions, no explanations that make any sense. I feel my head shrinking, tightening with pressure, as if I were taking an exam in a foreign language on a subject I never even knew existed.
\t\"She okay. She tries. She needs learn to smile. So serious always. But she not bad inside. Your father, he loves you also. They sometimes confused about how to love. But they okay.\"
\tIt is so painful to hear Juanita's voice. Why? \"Nana, I have to go. I wanted to let you know I'm okay. This thing I did. Taking the pills. It doesn't mean I don't love you.\"
\t\"I know that, my niña, I know. I no never have doubts. Don't worry. I be here waiting for you. Diosito didn't want you to die.\"
\t\"I have to go now, Nana.\"
\t\"Don't cry, my little baby. Everything okay. You see.\"
\tThe call ends. I lie there for I don't know how long, my hand on the telephone, as if I'm afraid to let go of the voice that flowed through it. It is possible, I realize, to have people in your life who love you and who you love, and to still want to kill yourself. It's almost as if part of the reason you're doing it is for them, because you are not worthy of their love, and you want to stop being a burden to them, contaminating their lives with your moodiness and grumpiness and miserableness. I feel Juanita's love now. And it makes me feel so much worse."