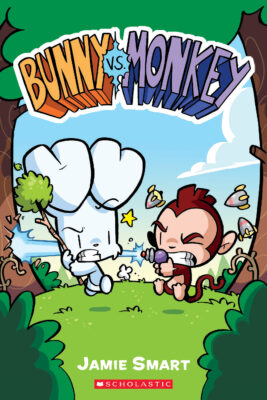 A team of scientists has sent a monkey into space! And good thing, too, because he's a mean, selfish, noisy, bullying little fur-bag. But... all does not go well with the flight, and Monkey's spaceship barely clears the first hilltop before crash-landing in a peaceful forest. Monkey decides this is a new world and claims it for his own. And his first decree is that all other animals should be banished! What follows is a series of hilarious, off-the-wall interactions between Monkey and the other forest animals.
Jamie Smart