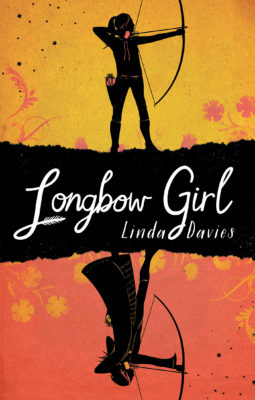 Set in the wilds of the Welsh mountains, the brave and beautiful longbow girl, Merry Owen, discovers a river that takes her back in time to the autocratic kingdom of King Henry VIII. While there she finds she must compete in an archery tournament to save her ancestors' land from being seized by their aristocratic neighbors the de Courcys. Merry's best friend James de Courcy (and heir to the de Courcy wealth) follows her back in time and the two get tangled up in their families' ancient histories. There are forces working against them both in the past and the present. Will they be able to survive their pasts to save their futures?
Linda Davies

Linda Davies is the bestselling author of several financial thrillers for adults and a forthcoming book about being held hostage in Iran. Longbow Girl is her young adult debut. She lives in Suffolk, England with her husband and three children. You can visit her online at www.lindadavies.com.

Merry Owen saw a dark figure vault over the ancient boundary wall between their farm and the Black Castle. The old enemy, trespassing on her land again. Coming her way.
She was alone but she had her longbow, a weapon of war from a thousand years ago that had won battles and saved kings, and still lethal today. In her hands, at least. Armed with this simple stave of wood, only just taller than her, primed by a decade of training, she always felt more: more powerful, alive, ready...
She nocked an arrow onto her string, drew back the bow to its quivering full extension, eyed the approaching figure. Too far away to recognise, but close enough to hit. She imagined all her ancestors – the longbow men of Nanteos – lining up like ghosts behind her, willing her on.
She loosed the arrow.'