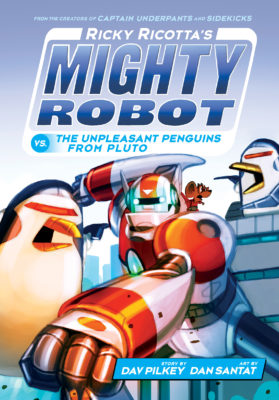 Ricky Ricotta and his Mighty Robot face off against a flock of flightless foes!

Ricky and his Mighty Robot have made a mess. They've been mean to Cousin Lucy, and now they must make it up to her. But their surprise present for Lucy turns into a trap when President Penguin from Pluto plots to take over Earth.

President Penguin is peeved because Pluto is no longer considered a real planet. Now he plans to make things very unpleasant for anyone who stands in his way. Can Ricky, Lucy, and their friends defeat this tiny terror and keep Squeakyville safe?

--- - Ricky and his Mighty Robot couldn't take it anymore. They got out of the pond and sat on the front steps, sulking.

"Hey, Ricky," cried Lucy. "Aren't ya coming back in the pond? I poured in a bunch of pink bubble bath! Now it's glamorous!"

When Ricky and his Mighty Robot saw the pond, they were very upset.

Ricky marched into the backyard where the adults were playing cards.

"MOMMMM!" cried Ricky. "Lucy made our pond all pink and bubbly!"

"It's NOT fun! It's STUPID!" Ricky shouted. "Every time we start to have fun around here, Lucy has to come along and RUIN it!"

"RICKY RICOTTA," exclaimed Ricky's father. "You have a BAD attitude. You need to apologize RIGHT NOW!"

But before Ricky could get the chance, Lucy started to cry.

"I'm sorry, Ricky," Lucy sobbed. "I just wanted to play with you! I didn't mean to ruin everything."

"I think we'd better go now," said Lucy's mother, Auntie Ethel. Ricky's aunt and uncle helped everybody get into the truck, and soon they were all on their way back home.