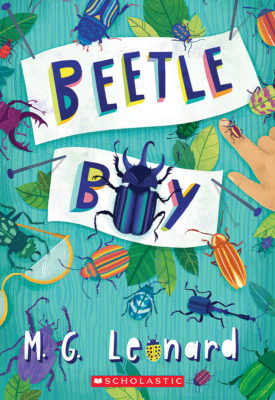 * "Even the most squeamish will be charmed." --Publishers Weekly, starred review

"A cracking mystery adventure, with plenty of Roald Dahl-esque humor to engage readers." --The Bookseller (UK)

Darkus Cuttle can't believe his eyes when a huge insect drops off the pants leg of his horrible new neighbor. It's a giant beetle -- and it seems to want to communicate.

But how can a boy be friends with a beetle? And what does a beetle have to do with the disappearance of his dad and the arrival of the terrifying Lucretia Cutter, with her taste for creepy fashion?

The first book of a trilogy, Beetle Boy is a darkly hilarious adventure full of exotic beetles, daring schemes, and true friendship.

M.G. Leonard is senior digital media producer at the National Theatre of Great Britain, where she creates podcasts and documentaries about making theater. Beetle Boy, her debut novel and book one of The Beetle Trilogy, was a Publishers Weekly and New York Public Library Best Book of the Year. She lives in Brighton, England, with her family. You can visit her online at www.mgleonard.com and follow her on Twitter at @MGLnrd.

Looking up from underneath, Darkus could see the features of the beetle’s face. He couldn’t have said why but it looked somehow...friendly. Its bulbous eyes glistened like blackberries, and it was holding its mouth open as if it was trying to smile. Although the beetle appeared to be pitch black from above, underneath it had orange hair sticking out of the gaps between its shell--Darkus had a feeling that wasn''t the right word--and body. It was almost cute. And then he realized: this was the creature from Uncle Max’s window, the day he’d moved in. The six legs, the horn, the size--it all fit.

As if to answer his question, the beetle began crawling up Darkus’s arm.

"What are you up to?" Darkus asked, intrigued now.

The beetle crawled along to his elbow and up to his shoulder.

"Hey, where are you going?" He laughed. He was beginning to like this insect.

Turning to face forward, the beetle hunkered down on Darkus''s shoulder, exactly where a pirate would have put a parrot.'