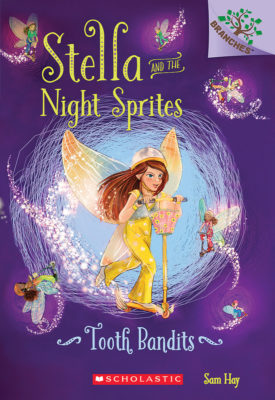 Series: Stella and the Night Sprites

Stella has a loose tooth! She hopes her magic glasses will let her meet the Tooth Fairy. But Stella meets Piper, a tooth bandit Night Sprite, instead. Piper rides a glittery scooter and she's sneaky--she swipes the shiny coins the Tooth Fairy leaves behind. Stella has to find a way to keep her own coin safe from Piper! Will she make a magical new friend, too?
Sam Hay

Sam Hay has always wanted to be a writer, and growing up in Scotland, she filled endless notebooks with stories and poems. She trained as a journalist and worked in newspapers and for BBC Television before writing her first children's book. Since then she's had more than twenty books published. Sam lives in Wales with her family and pets.