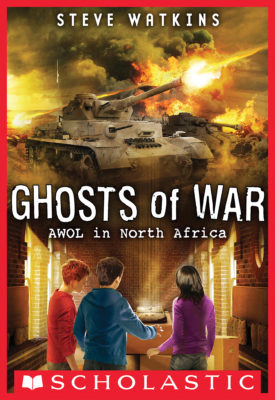 Anderson and his friends Greg and Julie have been doing everything they can to avoid the battered trunk full of old military things in his family's junk shop basement. Only, staying away seems impossible, and this time Anderson discovers a dusty World War II medic's bag inside the trunk. But who does it belong to? Because if the friends have learned anything, it's that they are about to be face-to-face with a ghost.

When an army medic ghost appears, Anderson's not sure how to help him. Or if he should help him. The ghost claims he was stationed in North Africa during World War II. But as far as Anderson knows, World War II was fought in Europe. So what's the real story behind this ghost?

Can Anderson, Greg, and Julie solve the mystery, or have they become part of a dangerous haunting?
Steve Watkins

Steve Watkins is the author of the novels On Blood Road;Juvie; What Comes After; Great Falls; Sink or Swim; Down Sand Mountain, winner of the Golden Kite Award; and the Ghosts of War series, including The Secret of Midway, Lost at Khe Sanh, AWOL in North Africa, and Fallen in Fredericksburg.

A former professor of journalism, creative writing, and Vietnam War literature, Steve now runs a nonprofit yoga studio and works with an urban reforestation organization in his hometown of Fredericksburg, Virginia.