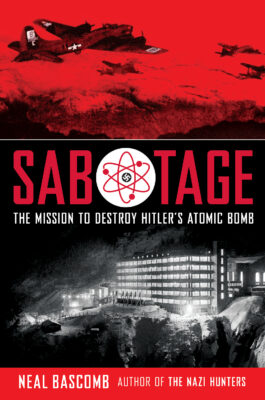 Neal Bascomb delivers another nail-biting work of nonfiction for young adults in this incredible true story of spies and survival.

The invasion begins at night, with German cruisers slipping into harbor, and soon the Nazis occupy all of Norway. They station soldiers throughout the country. They institute martial rule. And at Vemork, an industrial fortress high above a dizzying gorge, they gain access to an essential ingredient for the weapon that could end World War II: Hitler's very own nuclear bomb.

When the Allies discover the plans for the bomb, they agree Vemork must be destroyed. But after a British operation fails to stop the Nazis' deadly designs, the task falls to a band of young Norwegian commandos. Armed with little more than skis, explosives, and great courage, they will survive months in the snowy wilderness, elude a huge manhunt, and execute two dangerous missions. The result? The greatest act of sabotage in all of World War II.
Neal Bascomb

--- - ! 'At 8 p.m., white camouflage suits covering their British Army uniforms, the nine men skied away from the Fjøsbudalen cabin in silence. They were armed with five Tommy guns as well as pistols, knives, and hand grenades. In their rucksacks, they carried the explosives for the attack and everything they needed for their retreat into the Vidda: sleeping bags, rations, maps, and other survival gear.

Few of them believed that they would have the chance to escape, and there were poison pills hidden in their uniforms, to be taken in the event of their capture. They understood only too well what became of those who were brought into interrogation by the Gestapo.

Claus Helberg led the way. Hidden by low cloud, the moon shone dimly, and he had to navigate mostly by memory and a natural feel for the terrain. He kept a steady pace, sweeping around boulders and twisting through the scattering of trees in a way only one born to these hills could. The others followed closely behind, the cut of their skis barely a whisper through the snow.

Each man knew what to do once they arrived at the target. Their leader had made it clear that no matter what unfolded, no matter whether he or anyone else on the team was killed or wounded, those able were to "act on their own initiative to carry out the operation." Destroying the heavy-water plant was paramount.'