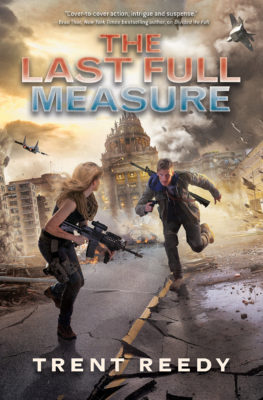 In a YA trilogy like no other, Trent Reedy has raised the most primal questions of our national existence: Do we owe our greatest loyalty to our friends? Our state? Our country? Our party? How do we reconcile our individual rights and common needs? What keeps us all united -- and what happens if we fall apart?

Now, in this third book, the Second Civil War has come to an end in Idaho. The Feds have taken the fight to other fronts, and Danny and his friends are free of US dominance. But that freedom comes with considerable costs, from Danny's disturbing flashbacks to the war, to the Brotherhood of the White Eagle, whose "security" for Freedom Lake looks more like outright thuggery. After Danny makes a shocking discovery about the Brotherhood's final aims, he and his friends lead a group of townspeople on a dangerous journey across a ravaged Idaho, hoping to build a better society of their own, and fulfill the dreams they had in what once was the United States.
Trent Reedy

--- - The image cut to static and then to a blue screen. A second later, a dozen or so other feeds on the wall screen did the same. "Paul, what's going on?" Buzz said to his producer. "I thought Montaine's people said they had this fixed."

"I don't get it." Paul checked some readouts on a different screen. "We should be up. This is showing all our equipment is...."

At nearly the same time, all the blue screens switched to black with the words EMERGENCY ALERT SYSTEM in bold white letters near the top. Three short screeches sounded, followed by a long, high-pitched tone. Seconds later our comms began to buzz the same way.

Thermonuclear detonation. The missing warheads. President Griffith had been trying to find them, but it was too late.

This couldn't be happening.