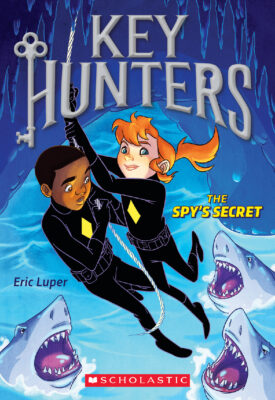 Cleo and Evan have a secret. A collection of books so dangerous they are locked up tight. A friend has vanished inside the pages of one of them. It's up to them to find the key that will set her free.

A SPY MUST BE READY FOR ANYTHING!

Agents Cleo and Evan have been given an impossible mission: become super-spies and foil the plans of an evil mastermind. But it won't be easy to break into the Viper's secret underwater lair, complete a daring rescue, find the right key, and get out alive!

--- - ! "The red boat was still gaining on them.
\t\"I have a plan!\" Cleo said.
\t\"I hope your plan includes not getting run over by a boat filled with thugs!\" Evan said.
\tThen he saw it. Cleo was driving straight toward a low bridge that connected two parts of the harbor. The path underneath it looked narrow. Maybe too narrow.
\t\"We're not going to make it,\" Evan said.
\t\"Sure we will!\" Cleo said.
\tThe red boat had almost caught up to them. They could hear one of the thugs over the boat's deafening motor. \"We have you now, Agent Cleo and Agent Evan!\"
\t\"Faster!\" Evan screamed.
\t\"This is as fast as it goes!\" Cleo cried.
\tEvan reached around Cleo and pressed another button. This one looked like a tiny flame.
\tThe engine roared and the Jet Ski rocketed forward through the narrow path under the bridge. The masked men barely had time to leap clear before their boat slammed into the bridge and exploded. Flames burst toward them, licking at their backs.
\tEvan and Cleo circled around to see the masked men bobbing in the water.
\t\"Hmm,\" Cleo said.
\t\"What's wrong?\" Evan asked.
\t\"We're spies, right? Aren't we supposed to say something clever right now?\"
\tEvan thought for a moment. \"How about, 'Nice day for a swim.'\"
\tCleo shook her head.
\tEvan felt a buzzing against his thigh. He fished a phone out of his pocket. The screen read avery phillips. A man's head appeared.
\t\"Agent Evan,\" the man said. \"Are you and Agent Cleo fooling with the agency's Jet Ski?\" Before Evan could answer, the man said, \"Well, enough of that. Return to base at once.\"
\t\"Where is base?\" Evan asked.
\t\"You're spies,\" the man said. \"Figure it out.\""