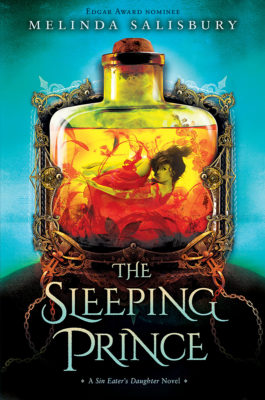 Ever since her brother Lief disappeared, Errin's life has gone from bad to worse. Not only must she care for her sick mother, she has to scrape together rent money by selling illegal herbal cures. But none of that compares to the threat of the vengeful Sleeping Prince whom the Queen just awoke from his enchanted sleep.

When her village is evacuated as part of the war against the Sleeping Prince, Errin is left desperate and homeless. The only person she can turn to is the mysterious Silas, a young man who buys deadly poisons from Errin, but won't reveal why he needs them. Silas promises to help her, but when he vanishes, Errin must journey across a kingdom on the brink of war to seek another way to save her mother and herself. But what she finds shatters everything she believed about her world, and with the Sleeping Prince drawing nearer, Errin must make a heartbreaking choice that could affect the whole kingdom.
Melinda Salisbury

Melinda Salisbury was born in the 1980s in a landlocked city, before escaping to live by the sea. As a child, she genuinely thought Roald Dahl's Matilda was her biography. When she's not trying to unlock the hidden avenues of her mind, she's reading, writing, or traveling. She lives in the UK and can be found on Twitter as @AHintofMystery, though be warned she tweets often.

--- - ! "In the Great Hall, the King of Lormere stood in pale cream breeches and a billowing white shirt, watching the Sleeping Prince warily. Behind him lay piles of bodies: soldiers, guards, and any servant who had been foolish enough to try to bodily defend their king. All of them dead, most of them slain before they could raise their weapons.
\tThe king held something in his hands, a metal disc on a chain, brandishing it at the Sleeping Prince as though it were a gift. The Sleeping Prince smiled indulgently at the king.
\t“If we could talk,” the king said, his face pale, his hair a frenzy of dark curls around it.
\t“No talk, Merek of Lormere,” the Sleeping Prince said, his smooth, calm voice a contrast to his maniacal smile. “Your men are all dead. Your castle and kingdom are mine. The only words I'll hear from you are your pleas for mercy.”
\tMerek's dark eyes flashed. “I assure you, you won't,” he said. “I won't die begging.” Then he lunged.
\tThe Sleeping Prince stepped to the side and raised one of his swords, arching it through the air until it found its sheath in the unprotected breast of the new Lormerian king.
\tKing Merek made a soft sound of surprise and turned his eyes to the Sleeping Prince, his disbelief childlike. Then those same eyes fluttered closed and he slumped to the ground. The Sleeping Prince watched him, his expression unreadable.
\tThen he stepped over the king's body and crossed the hall, mounting the steps to the dais. He walked along its length, dragging a bloody finger down the long wooden table. When he reached the high carved seat, he frowned. Peasant craftsmanship, dull and uninspiring. He deserved better.
\tAnd now Lormere was his, he would have it."