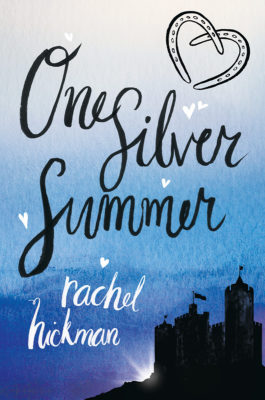 After losing her mom in an accident, Sass is sent to live with her uncle in England. Far from her native Brooklyn, the rocky shores and crumbling castles of Cornwall seem like the perfect place to hide her grief. And when she stumbles across a silver horse in a sunlit meadow, Sass feels a surprising sense of peace . . . only to have it broken by a boy.

Arrogant and distrustful, the horse's trainer, Alex, doesn't approve of the trespassing American. Yet after a few chance meetings, he begins to feel a connection to the curious girl with the sad eyes, and offers to teach her to ride. Sass never expected to feel anything again--least of all love--but the lessons reveal a far different Alex, and soon their friendship turns into something more.

But Alex has a secret--a bombshell about his family that could shatter Sass's trust . . . and force him to abandon the one girl who made him believe in himself.
Rachel Hickman

Rachel Hickman is the Co-Founder of Chicken House, the acclaimed children's book publishing company. She lives in Somerset, England. One Silver Summer is her first novel.

--- - ! "Sass flew down the coast path. After about a mile, she came to a bay, a sweep of dark wet sand watched over by rocky cliffs on either side. And below her, galloping through the water, was a horse and rider.
\tShe followed the cliff path until she saw a skinny shortcut down. It wasn't much more than a parting in the bracken, most likely made by sheep, not people. As she made her way toward the sand, she could see that the horse had wheeled around and was now racing away from her, spooking at the wind, and the waves.
\tWhen the rider reached the end of the shore, he sat down, half-circled smoothly and brought the horse back to a trot. With a shock of recognition, she realized her mistake. A big one. The rider coming towards her was him: the boy from the meadow.
\tHe stared, then gave her a curt nod, and reined in his horse which sidled to a halt. He corrected it with an impatient tap of his heels, and it overreacted, skittering backwards in a cold splash of spray.
\tThe boy studied Sass as if she was a crab who'd crawled out from under a rock. She felt suddenly self-conscious in her ragged jeans and man's shirt. “You know you're trespassing again,” he said.
\tHer discomfort turned to indignation. 'Oh, I'm sorry! Is this your beach? I better go then.'
He took off his helmet and ran a hand through his tousled hair. 'What were you doing up there? He asked. 'Were you watching me?'
\t “I didn't know it was you. I was sort of watching your horse. He's very beautiful.” And has better manners than you, she thought.
\tHe gave her a strange look, and before he could say anything else, Sass spun around and strode off. “Don't worry,” she called over her shoulder. “I won't bother you again.” She could feel his eyes on her as she struggled back up the narrow path. This place: England. She didn't belong here. With all her heart, she wanted to go home."