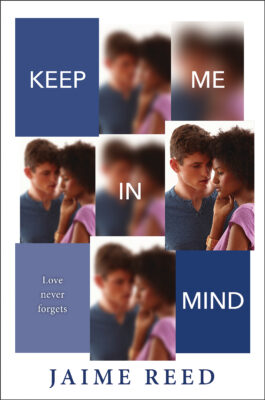 Keep Me in Mind

Ellia Dawson doesn't recognize the handsome boy who sits in tears by her hospital bed. He claims he's her boyfriend, Liam. But to Ellia, he's a stranger. She remembers her name. Her parents. Her best friend, Stacey. But Liam is a total blank in her life.

Liam McPherson is devastated. His girlfriend, Ellia, suffered a terrible accident--maybe because of him--and now she's lost her memory. But the harder Liam tries to reach Ellia, and remind her of what they had, the more she pulls away. As Ellia begins on the slow road to recovery, Liam begins work on a secret project that he hopes will bring back the girl he loved.

But can there ever be a future when the past is in pieces?
Jaime Reed

Jaime Reed is the author of The Cambion Chronicles series and Keep Me in Mind. She studied art at Virginia Commonwealth University. She now lives in Virginia, where she works part-time as a line producer for a small independent film company. But mostly she writes and watches '80s movies. Learn more about her at jaimereedbooks.com.

There he goes again. Same time, same place every morning for the past week without fail. At exactly 5:30AM, he'd emerge from the dark and unkempt foliage of my neighbor's yard across the street, cut across the high grass, then commandeer the sidewalk as his personal gym. The streetlamp served as both a spotlight and warm-up bar as he stretched, flexed, and shook loose his limbs for a good five minutes before taking off toward the beach for his run.
He'd leave for about forty minutes then return to the same spot, dripping with sweat, sea water or whatever made his running shorts stick to his body like shrink wrap, then he'd reclaim the walkway for the cool-down portion of his workout. On a good day, I'd catch a flash of ripped abs whenever he lifted his shirt to wipe his face. I'd be lying if I said that the view wasn't worth the price of admission -- the dude was hot. But if he wanted to take this show on the road, he should lose the T-shirt and maybe pick up some dance moves.
He embodied the typical California boy with his sandy blonde hair, lean build, and an all-over tan. Unlike the rest of the beach boys of Quintero, he gave off a sad and gloomy aura that seemed to pour off him in waves as he glanced up at my window. The lights were off in my bedroom, but the intensity of his stare made me wonder if he can see me through the sheer curtains. Unless this boy had mutant X-ray vision, it was highly unlikely. Even still.
That stare ...
The funny part was, his morning vigil didn't scare me -- I was just confused as to why I'd wake up at the exact same time he'd come around. 5:30AM. Every day.