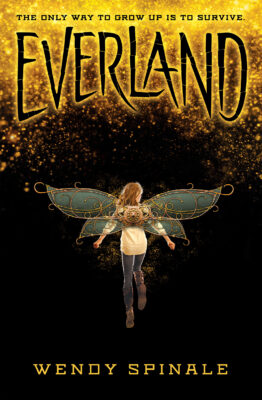 London has been destroyed in a blitz of bombs and disease. The only ones who have survived are children, among them Gwen Darling and her younger siblings, Joanna and Mikey. They spend their nights scavenging and their days avoiding the deadly Marauders-the German Army led by the cutthroat Captain Hanz Otto Oswald Kretschmer.

Unsure if the outbreak has spread but desperate to leave, Captain Hook is on the hunt for a cure, which he thinks can be found in one of the surviving children. He and his Marauders stalk the streets snatching children for experimentation. None ever return.

Until one day when they grab Joanna. Gwen will stop at nothing to get her sister back, but as she sets out, she crosses paths with a daredevil named Pete. Pete offers the assistance of his gang of Lost Boys and the fierce sharpshooter Bella. But in a place where help has a steep price and every promise is bound by blood, it might cost Gwen more than she bargained for.
Wendy Spinale

Wendy Spinale is a former character actor for the Disneyland theme park (so she's very familiar with the world of make-believe). She is the author of Everland and its follow-up, Umberland, as well as Lost Boy, a prequel novella to Everland.

Wendy lives with her family in the San Francisco Bay Area.

--- - ! 'His face draws close to mine. “You don''t plan to march into the city and rescue your sister with a couple of dull daggers, do you?”
“I''ll find another weapon on the way.” I grab for my pack, but he brushes my hand aside.
“Do you really believe you and your kid brother can get her back all by yourself? It''s only a matter of time before you''re caught, too.” Pete hands me my bag. “Most survivors have learned the two rules to staying alive. Number one: don''t leave behind a footprint. Bella and I stick to the rooftops. Others, those that are skilled with weapons and can run fast…”
“And have stomachs of steel,” Bella interjects, wrinkling her nose.
“Those Scavengers utilize the sewage systems,” Pete finishes.
“There are other people?” Mikey asks, tugging on Pete''s coattail.
“Of course there are others,” Bella says with exasperation in her voice.
“Lots of them. All kids, obviously. You don''t think the four of us are the only ones left in England, do you?” “Where are the other kids?” Mikey asks, his expression wild with curiosity. Pete beckons us to the window. Mikey follows and, with reluctance, I join them. In the distance, the crumbled buildings of Everland rise toward the sky like steel, concrete, and brick tombstones. The navy blue hues of night have faded into lavender as the sun on the horizon chases away what is left of the evening stars. Only two twinkling points remain. He points to the west.
“Second to the right,” he says. “Just below it.”
“You''re telling me there are children hiding in Everland?” I ask in disbelief.'