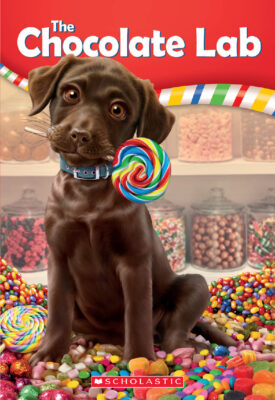 Cocoa is cooking up trouble!

Take one family's chocolate shop, add a dash of competition with the fancy new store on the block, stir in a candy-crazy Labrador named Cocoa...and you've got a recipe for disaster! If Mason and Hannah can win first prize at the annual Chocolate Expo, they may be able to save their parents' shop. But Cocoa can't control himself in the kitchen. And one more mess means they'll have to say goodbye to their pup for good!

--- - ! "Mom drops a spatula and some dipping forks into the sink. \"We may have to move in with Grandpa for a while, just until we get back on our feet.\"
\t\"How long is a while?\" Hannah asks. \"School starts soon. I'm going to be head pirate in the fall musical. Mrs. Pratt said so when I saw her at the supermarket.\"
\tDad unplugs the chocolate warmer. \"One of the reasons we need to go to Glens Falls is to look into school for you guys,\" he says.
\t\"But what about the store?\" I say.
\tDad sighs. \"Business has dropped off since Kunkle Kandies came to town. We were hoping the Chocolate Expo would help us get back on our feet.\"
\t\"We can only keep this place open if it's making money,\" Mom adds.
\t\"What about Cocoa?\" I say. \"Grandpa's building doesn't allow pets.\"
\tMom slides the registration folder for the Chocolate Expo into the trash and cups my face in her hands. \"Try not to worry, Mason. Your father and I will figure something out.\"
\tI look past Mom to the garbage can, and it looks like they've already figured out plenty. If that folder had a tongue, it would've been sticking it out at me.
\tCocoa makes a chuffing sound as though he wants me to pull the folder out. Then I realize he's trying to tell me his superpowerful ears hear someone coming up the walk.
\tThe door swings open and Miss Meredith stuffs her cell phone into her pocket. \"Welcome to Towne Chocolate Shoppe,\" she says brightly. When she sees who it is, her smile vanishes and she pulls out her cell phone again.
\tGrandpa Irving is standing there with a suitcase tucked under one arm, a bundle of rolled-up maps under the other, and a tattered tricorn hat on his head. His eyebrows look bushier than ever.
\t\"Where are my two favorite grandkids?\" he bellows in his big-belly voice.
\t\"We're your only grandkids!\" Hannah says like she does every time he says that.
\tGrandpa looks around the store. \"Sheesh, did Virginia's Second Regiment march through here or something?\"
\tDad explains what happened while I go over and give Grandpa the strongest bear hug I can.
\tHe fake groans from my squeeze and bends down (this time giving a real old guy achy-back groan). Maps spill from under his arm. \"Don't you worry about this,\" he says. \"Everything is going to be just fine.\"
\tBut everything isn't going to be just fine. Towne Chocolate Shoppe, our family business, is going to close. Hannah and I will have to go to a new school, away from all our friends. And worst of all, Cocoa is going to live in some kennel somewhere with a bunch of dogs he doesn't even know.
\tI look for Hannah so we can figure out what to do, but she's already stomped away."