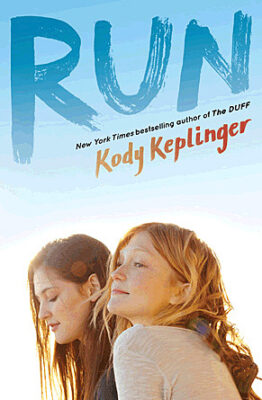 Bo Dickinson is a girl with a wild reputation, a deadbeat dad, and a mama who's not exactly sober most of the time. Everyone in town knows the Dickinsons are a bad lot, but Bo doesn't care what anyone thinks.

Agnes Atwood has never gone on a date, never even stayed out past ten, and never broken any of her parents' overbearing rules. Rules that are meant to protect their legally blind daughter -- protect her from what, Agnes isn't quite sure.

Despite everything, Bo and Agnes become best friends. And it's the sort of friendship that runs truer and deeper than anything else.

So when Bo shows up in the middle of the night, with police sirens wailing in the distance, desperate to get out of town, Agnes doesn't hesitate to take off with her. But running away and not getting caught will require stealing a car, tracking down Bo's dad, staying ahead of the authorities, and-worst of all-confronting some ugly secrets.
Kody Keplinger

Kody Keplinger grew up in a small Kentucky town. During her senior year of high school, she wrote her debut novel, The DUFF, which is a New York Times bestseller, a USA Today bestseller, a YALSA Top Ten Quick Pick for Reluctant Readers, and a Romantic Times Top Pick. It has since been adapted into a major motion picture. Kody is also the author of Lying Out Loud, a companion to The DUFF; That's Not What Happened; Run; Shut Out; and A Midsummer's Nightmare, as well as the middle-grade novels Lila and Hadley and The Swift Boys & Me. Kody lives in New York City, where she teaches writing workshops and continues to write books for kids and teens. You can find more about her and her books at kodykeplinger.com.

--- - ! "I turn the knob and push open the door. Agnes lets go of my arm and slides her hand along the wall until she finds the light switch. A fluorescent light flickers on above us, revealing two cars parked side by side. One is the Atwoods' regular car, a white Toyota. I've seen Agnes's parents driving it around Mursey, picking her up from school, filling it with gas at the Shell station on Buckley Road. The other is an old, silver Chevy I ain't seen before.\t
\t\"My sister's car,\" Agnes says, like she's reading my mind. \"She's still at college, so nobody's using it.\"\t
\t\"Won't she be home for summer soon, though?\"
\tAgnes shrugs. \"We need it more than she does.\"\t
\tI can't argue with that. Agnes and I toss our backpacks in the back. Neither of our bags are heavy. We just packed what we absolutely needed. \"Hop in, Utah,\" I say, patting the backseat. She climbs onto the seat and licks the side of my face before I shut the door.\tAgnes gets into the passenger seat and I run to turn off the garage light before I slide behind the wheel. Above my head, attached to the visor, is an automatic garage door opener.\t\"Will your parents hear?\"\t
\t\"No,\" Agnes says. \"They sleep like rocks.\"
\tMy heart is pounding and my hands are slick with sweat as I shove one of the keys into the ignition. It takes me a few tries to get it to turn over, and the revving is so loud it makes me flinch. Her parents had better sleep like the dead, or else we ain't even getting out of the driveway. The clock on the dashboard lights up and tells me it's just past three a.m."