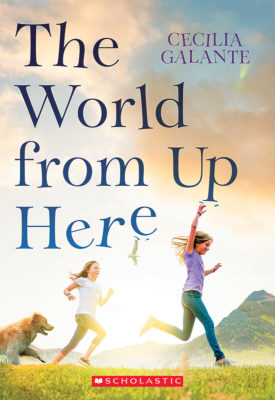 The World From Up Here

Wren Baker has never felt brave a day in her life. She doesn't even know what she's afraid of, really. Only that if she raises her voice or leaves her mark or ventures too far from home, she'll risk falling flat on her face.

But that all changes when Wren's cousin, Silver, walks into her life. Silver is totally fearless. Maybe that's why she's the most popular girl in the sixth grade. She dares Wren to take risks, to live out loud, to finally spread her wings. And when Silver decides to undertake the journey of a lifetime, Wren is forced to make a decision: Is she in or is she out?

There's only one way Wren will ever learn to fly. It's time for her to stand at the edge of the unknown...and jump.

Full of heartache and hope, The World From Up Here is a tender, moving story about old secrets and new friendships, anxiety and Asperger syndrome, and what it means to face the things that scare us most.
Cecilia Galante

Cecilia Galante is the author of books for children, teens, and adults, including The World from Up Here and Stealing Our Way Home. Her first novel, The Patron Saint of Butterflies, won a NAIBA Book of the Year Award and was an Oprah's Book Club Teen Reading Selection, a Book Sense Pick, and a Bank Street Best Children's Book of the Year. In addition to teaching eighth grade English, Cecilia also teaches fiction writing at Wilkes University's graduate creative writing program. She lives in Kingston, Pennsylvania.

\tSlowly, I peeled one eye open. Then the other. I forced an eyeball to the left, just barely peeking out of the window. My head turned a quarter of an inch. Then a half inch. I leaned forward just a little so that I could bring my eyes into focus.

\tIt was hard to pinpoint exactly when my breathing started to slow, or when I stopped sweating. Actually, I might not have stopped sweating at all. But something did pause and then settle just the tiniest bit when I looked out at the view below, a patchwork of green and yellow fields punctuated every so often by a red or white silo. Blue swimming pools the size of dominoes gleamed up at us, and ribbons of highway, smooth as silk, meandered in and out of the lush countryside. It was so quiet up here. So quiet and beautiful.

\t\"Uh huh.\" For a single, ridiculous second, I wondered if birds ever felt afraid when it came to flying. Was there ever some little runt who just didn't have it in him the way his brothers and sisters did, who hovered fearfully at the lip of the nest, staring down at the enormous expanse below? And if there was, what did it do? How did it learn to let go one day and fly?
\t
\t\"Look over this way, Wren!\" Russell said.

\tI peeked over the top of Russell's head. There was the mall, or at least what I thought was the mall, with its huge conglomeration of tan buildings shoved in tightly together and enormous expanse of empty parking lots. And there, on the other side of the highway, was the Susquehanna River, no wider now than a Tootsie Roll, its sludgy water the color of blue mud. Further ahead was someone's cornfield, the edges of it cut sharply like a square, and to the left of it, a gigantic mountaintop, which rose up into the sky in a sea of trees.

\tMy heart lurched as I looked at it again. Was that Creeper Mountain? It was hard to know from all the way up here. I stared at it again, waiting perhaps, for Witch Weatherly to appear all of a sudden at the very tip top, her red raven perched on her shoulder, shaking her fist at us. But there was nothing to see except a slew of tall pines, which bent and swayed in the wind like feathers. And then suddenly I caught sight of it: the ever-present thread of white smoke, which twined its way up through the trees and then disappeared into the air above them. My fingers trembled against Russell's as we passed over the top of it, and then moved on, erasing it from view.

\tI didn't answer, still clutching the edge of my little brother's shirt as the glider tilted to one side and then turned around, leading us back home again. All I could think about was getting back down to the airport in one piece and putting my feet down on solid ground. But another little part of me was still wondering about those baby birds. Was the answer really as simple as I guessed it might be? Could it be that the only way they learned to fly was to tiptoe up to the very edge of the nest?