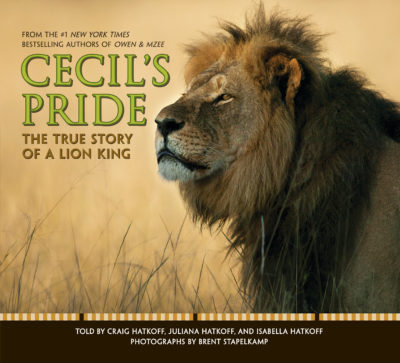 Known as the King of Beasts, the lion has always been a symbol of strength and courage. But there was one real lion that earned the title of Lion King. He was known simply by name: Cecil. News of his tragic death spread across the globe like wildfire, raising questions to an unprecedented level about our relationship to our animals and our planet.

Cecil's Pride is a tale of resilience and responsibility--a triumph out of tragedy. Discover Cecil's struggle as a young lion to survive, his rise to power, and his extraordinary alliance with Jericho, his former arch-rival. Cecil is gone, but his legacy lives on. The world knows the story of how Cecil died. This is the story of how he lived.

Complete with stunning photographs by Brent Stapelkamp, a photographer and lion researcher with the Oxford University Wildlife Conservation Research Unit that has tracked Cecil and his pride for nine years.

Craig Hatkoff, Isabella Hatkoff, and Juliana Hatkoff are also the authors of Knut: How One Little Polar Bear Captivated the World and Looking for Miza: The True Story of the Mountain Gorilla Family Who Rescued One of Their Own. The Hatkoffs live in Manhattan.

--- - 1The lion has always been a symbol of strength and courage. They are known as the king of beasts, but only one lion king became known by everyone. His name was Cecil.

Cecil ruled a very large territory in Africa inside Hwange National Park, Zimbabwe's largest game reserve. About the size of the state Connecticut, the park is even larger than many countries. Thousands of people visit Hwange every year to see the wildlife and take photographs. Cecil was well-known because he seemed to enjoy having his picture taken by tourists. Unlike most of the animals, he would casually stroll by the safari vehicles and pose.

Lions aren't the only animals that call Hwange home. Giraffes, zebras, elephants, leopards, and rhinos roam freely through the vast deserts, forests, and grasslands. There are no fences or walls like in a zoo.

Hwange has a diverse ecosystem, but there's a delicate balance. When something changes, it can send a ripple throughout the whole park. No one knew it yet, but a big ripple was about to travel across the globe.