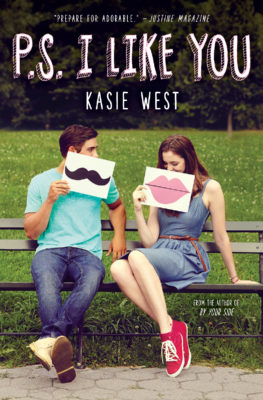 While spacing out in Chemistry class, Lily scribbles some of her favorite song lyrics onto her desk. The next day, she finds that someone has continued the lyrics on the desk, and added a message to her. Intrigue!

Soon, Lily and her anonymous pen pal are exchanging full-on letters -- sharing secrets, recommending bands, and opening up to each other. Lily realizes she's kind of falling for this letter writer. Only who is he? As Lily attempts to unravel the mystery, and juggle school, friends, crushes, and her crazy family, she discovers that matters of the heart can't always be spelled out...

Kasie West brings irresistible wit, warmth, and sparkle to this swoon-worthy story of love showing up when you least expect it.
Kasie West

Kasie West is the author of several YA novels, including The Fill-in Boyfriend, P.S. I Like You, Lucky in Love, Listen to Your Heart, and Maybe This Time. Her books have been named as ALA Quick Picks for Reluctant Readers and as YALSA Best Books for Young Adults. Kasie lives in Fresno, California, with her family, and you can visit her online at kasiewest.com.

I was excited to read the letter. The letter that I had retrieved from beneath my desk in Chemistry and was now unfolded on top of my desk.

Track 8 on Blackout''s Blue Album? I haven''t listened to that one yet. I only have their first album. And even though it goes against my reverse psychology theory of how I handle life, if you think it''s good, I''ll try it out. Any other bands I should add to my ''shutting out the world'' playlist? I could use some of that to deal with my life right now. Does that make me sound pathetic? I''m not, most of the time. I''m actually a pretty fun guy when not at home.

Guy? He''s a he? My eyes went back to the desktop -- to the line that had made me think he was a girl. It was still there. His claim that he wanted to be Blackout when he grew up. So it had been a joke? He liked to joke.

He was a guy. A guy who liked the same music as me and was bored in Chemistry and had a sense of humor. We were soul mates. I smiled a little then shook my head. The guy was bored and was writing me letters to pass time. He wasn''t asking me out or anything.
I realized my brain had stopped mid-letter. I read the rest.

So what should we chat about that''s not so depressing? I''m open for suggestions. Perhaps one of the following topics: Death, cancer, global warming (or is it climate change now?), animal cruelty ...

I turned over the page, but that was the end. We''d filled up an entire page with our back and forth communication. Which meant I got to keep this page. I folded it nicely and stuck it in my bag.

I stared at the new clean sheet in front of me then wrote:

How about we discuss the fact that you''re a guy. Let''s get married and have cute Indie Rock babies.

I bit the inside of my cheek to keep from laughing and dropped that sheet of paper in my backpack by my feet. I wasn''t even going to mention the fact that he was a he. I was going to pretend I knew all along. Because it changed nothing.'