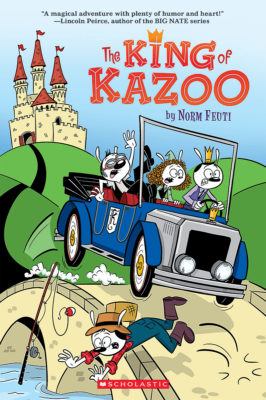 The King of Kazoo

Scatterbrained Cornelius, King of Kazoo, and his resourceful daughter, Bing, explore a mysterious cave at the top of Mount Kazoo. There they discover a famous alchemist named Quaf is planning a dangerous and forbidden experiment. Now Cornelius, Bing, and the brilliant royal inventor Torq must go all out to stop Quaf before his crazy undertaking threatens the entire kingdom.
Norm Feuti

Norm Feuti is a nationally syndicated cartoonist, author, and freelance illustrator. King of Kazoo was his first graphic novel. Hello, Hedgehog! is his first early reader series. Norm lives in Massachusetts with his wife and children.