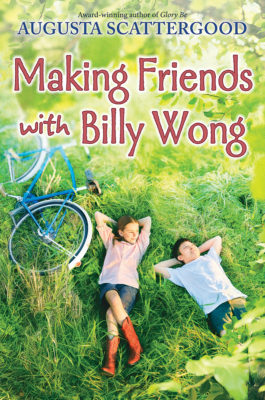 Azalea is not happy about being dropped off to look after Grandmother Clark. Even if she didn't care that much about meeting the new sixth graders in her Texas hometown, those strangers seem much preferable to the ones in Paris Junction. Talk about troubled Willis DeLoach or gossipy Melinda Bowman. Who needs friends like these!

And then there's Billy Wong, a Chinese-American boy who shows up to help in her grandmother's garden. Billy's great-aunt and uncle own the Lucky Foods grocery store, where days are long and some folks aren't friendly. For Azalea, whose family and experiences seem different from most everybody she knows, friendship has never been easy. Maybe this time, it will be.

Inspired by the true accounts of Chinese immigrants who lived in the American South during the civil rights era, these side by side stories--one in Azalea's prose, the other in Billy's poetic narrative--create a poignant novel and reminds us that friends can come to us in the most unexpected ways.
Augusta Scattergood

Augusta Scattergood is the author of Glory Be, which was a National Public Radio Backseat Book Club selection, a Texas Bluebonnet Award nominee, and hailed by Newbery medalist Richard Peck as the story of a bygone era "beautifully recalled." Her novel The Way to Stay in Destiny was named an Amazon Best of the Month. A children's book reviewer and former librarian, Ms. Scattergood has devoted her life and career to getting books into the hands of young readers. Her reviews and articles have appeared in the Christian Science Monitor, Delta Magazine, and other publications. Ms. Scattergood, who lives in St. Petersburg, Florida, is an avid blogger. To learn more, visit www.augustascattergood.com.

--- - From Making Friends with Billy Wong:

(Azalea)
All it took to send my summer on the road to ruin was a fancy note and a three-cent stamp. The minute that envelope showed up, Mama was packing my suitcase.

Since I was old enough to stand on a wooden fruit crate and roll nickels.
First, at my parents' grocery. Now, at Lucky Foods.
After school.
Most every day.
Weekends, too.
I've worked hard.

Now I run hard, like it's a race, a sprint.
All the way back to Lucky Foods.
I push open the door.
Stop.
Catch my breath.
Great Aunt waits by the cash register.
“Sorry I'm late, Auntie.”
“Put on your apron. Evening shoppers coming.”
She disappears into her kitchen behind the store.
Smells of pork and onions drift in, mix with peppermints on the counter.

Maybe I shouldn't climb trees to daydream in the clouds.
But high on a tree branch, stories pop wide open.

I tie the white apron around my waist and straighten pickle jars.
Stories jumping.
Popping.
Waiting to explode
Onto the pages of the Tiger Times.