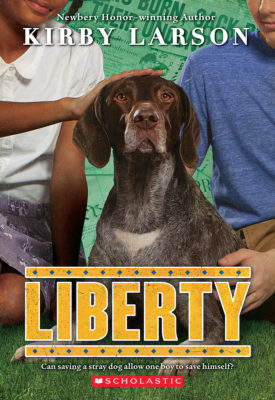 Fish has a knack for inventing. His annoying neighbor, Olympia, has a knack for messing things up. But when his latest invention leads Fish to Liberty, a beautiful stray dog who needs a home, he and Olympia work together to rescue her.

At the Higgins boatyard, where the boats that just might save the Allied forces during World War II are built, the wartime workforce is integrated and includes women and the disabled. However, a friendship that crosses racial lines is not the norm in 1940s New Orleans.

Fish, who suffered from polio and whose dad is away fighting in Europe, looks up to Mr. Higgins, and he's thrilled when one of his inventions helps Mr. Higgins's engineers unlock the mechanics of the landing crafts. Mr. Higgins inspires him to be bold and brave. As Fish enlists the help of unexpected friends and allies to save Liberty, he finds his perceptions of the world -- of race and war, family and friendship -- transformed.
Kirby Larson

A man wearing suspenders over a dingy undershirt glared at Fish.

"I don''t have a --" he began. Then he turned around to catch a skinny cur hound trotting along behind him. She wore white stockings on her two front legs, and a white bib on her chest. The rest of her was a mottled coppery brown. Kind of like that patchwork quilt Miss Zona threw over her living room sofa. The dog cocked her head at Fish, as if asking, Don''t I know you?

"Well, if I catch her around here again, she won''t be anybody''s dog," the man snapped. "Bound to go after my chickens sooner or later. Scram!" He flapped his arms and hollered at the dog' - ! ' Fish felt like he was being yelled at, too. He let out his breath when the man stormed off.

Fish whistled softly, patting his leg, and the dog took a few steps toward him. "That''s a girl," Fish encouraged. A few more steps. "Come with me, okay?" He could count her ribs. "I''ll find you some food." She froze, a front paw in the air.

The crabby man barreled around the corner of his house, picking up rocks as he ran.

The man clipped the dog on the hindquarters. She yelped, tearing off down the street, a blur of copper and white.

"She comes back around here again, I''m going to shoot her." The man threw one last rock.

Fish scrambled away, as fast as he could with his bad leg.