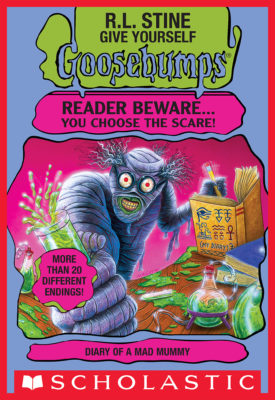 Give Yourself Goosebumps: Diary Of A Mad Mummy

While you're on vacation you get a chance to check out an exhibit of Egyptian artifacts and a pretty cool mummy. But when you get to where the mummy is supposed to be all you find is a pile of bandages and a really old diary filled with entries that seem to have been written by Mr. Mummy himself!

If you touch the bandages they'll wrap themselves around you and poof -- you're a mummy. If you decide to use the clues in the diary to find the wrapped wonder you'll find yourself searching through the pyramids in Egypt. Will you be stuck there -- forever?