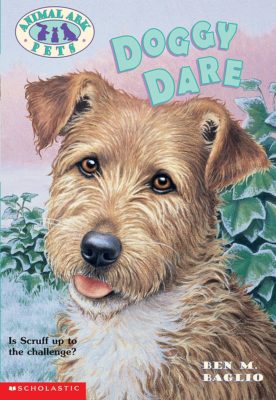 Joey, a new boy in Mandy's class, is deaf. He wants a dog more than anything, but his mother will not allow it. When a stray dog keeps following Joey around, Mandy thinks that the dog can be taught to help him. But can the dog be trained? Do Mandy and James dare to try?

I was born in New York, in 1960. I spent much of my childhood in a small town in New Jersey, about 10 miles from Philadelphia. I was the only boy in a family with three sisters. Since my parents wouldn't give me a brother, I thought I'd settle for a dog. Mom and Dad took a lot of persuading, but finally my parents agreed to get me a black puppy called Nero. I thought I'd be able to train him to be an amazing rescue dog, but all I could ever get Nero to do was sit, speak, and give me his paw! No search and retrieval, no discovering buried treasure or even leaping his way around an obstacle course — although he was very good at making food disappear quickly. I loved him, whatever he did.

I spent a lot of my childhood reading; I'd read anything from cereal boxes to Charles Dickens. English was always my favorite subject, and when I graduated from high school I decided to study English Literature at the University of Pennsylvania. As part of my coursework, I was lucky enough to spend a year in Edinburgh, Scotland, and I really enjoyed living in Great Britain.

After graduation, I started to work as a children's book editor in New York City. I edited all kinds of books — sports stories, mysteries, teen romances, and even a series called Sweet Valley High, which was a big success. Five years later, a job at publishing house in England became available and next thing I knew I was living in Great Britain again!

I continued to edit children's books for a few more years, and then decided to try and develop a book series of my own — but I wasn't sure what I wanted it to be about. I had always loved animals — dogs, cats, horses, everything — and by then I had kittens of my own, two Russian Blues called Benjamin and Peter. One day a friend of mine asked where they were, and I said 'in the kitchen.' Suddenly an idea had occurred to me — Kittens in the Kitchen. Wouldn't that make a good title for a first book in an animal series? My friend and I spent hours thinking of other titles — Puppies in the Pantry, Goat in the Garden, Piglet in a Playpen. The list seemed almost endless!

That's when I started to create the characters of Mandy Hope and James Hunter, and their adventures in the Animal Ark series. The books originally were published in England (under the pseudonym Lucy Daniels), and have since gone on to be published in the USA and translated into 15 languages. There's even been a live-action television series in England!

Aside from writing, I enjoy all kinds of sports, including scuba diving and swimming, music and movies. I regularly receive fan mail from Animal Ark readers all around the world, and I would welcome hearing from any readers from my home country.

Mandy and James and all the characters in Animal Ark have become very real to me, and I hope they become real for you, too.