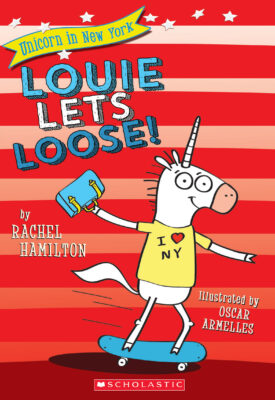 Louie the Unicorn is a star! At least, he will be once he polishes his act at performing arts school. With a song in his heart, a spring in his step, and an unwaveringly sunny outlook, he's about to take the big city by storm. It's time for this unicorn to shine!

But his ride to super stardom is bumpy -- the school already has a superstar unicorn, not to mention singing mermaids and dancing trolls. And apparently you can't pay for things with glitter! But Louie isn't giving up. His irrepressible spirit can't be tamed. And he's about to take a big bite out of the Big Apple so he can see his name in lights!
Rachel Hamilton

Rachel Hamilton is a graduate of both Oxford University and Cambridge University. She developed a passion for storytelling as an English teacher when she discovered it was the perfect way to get her students to stop talking and listen to her. She has written several books for young people, including The Case of the Exploding Brains. Rachel loves to make people laugh, especially when it's intentional rather than accidental. She divides her time between the UK and Dubai.

--- - ! "Greetings, humans! I am Louie the Unicorn and this is my tale. That's tale with a T-A-L-E. I can't give you my T-A-I-L because I need it for swatting flies and swishing handsomely.

\tAnyway, my tale that is not a tail began with a yawn on yet another perfect day in Story Land. The sun had his shiniest hat on, the birds were belting out their greatest hits, and the mermaids, goblins, and fairy folk were living in perfect harmony somewhere over the rainbow.

\tExcitement arrived with the wind.

\tI'm talking about the breezy kind of \"wind\" here, not the bottom-explosion kind. Mom says unicorns shouldn't talk about bottom-explosions because we have our sparkly reputations to protect.

\tSo there I was, with my non-exploding bottom, trotting through the magical forest, when a scrap of paper floated into view.

\t\tNEW YORK SCHOOL OF PERFORMING ARTS
\tAre you a magical creature who loves to perform?
\t\tAre you looking for fame and glory?
\t\tIf so, then we're looking for you!
\t\t\t\tEnroll: 4PM, Monday
\t\t\t\t\tBE THERE!

\tWow! And another wow!

\tI'd been desperate to visit New York since I first read about it in the Story Land library. Bright lights. Big dreams. Even bigger doughnuts. This was my destiny. I, Louie the Unicorn, was going to become a super-sized New York superstar.

\tAlthough I should probably check with Mom and Dad first."