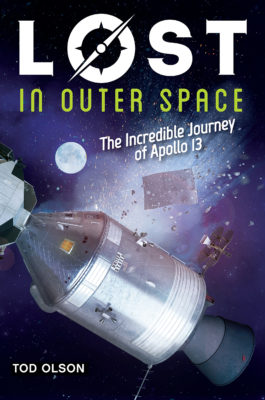 Lost in Outer Space (Lost #2) : The Incredible Journey of Apollo 13

April 13, 1970: Two hundred thousand miles from Earth and counting, an explosion rips through Jim Lovell's spacecraft. The crippled ship hurtles toward the moon at three times the speed of sound, losing power and leaking oxygen into space.

Lovell and his crew were two days from the dream of a lifetime - walking on the surface of moon. Now, they will count themselves lucky to set foot on Earth again.

From "Houston, we've had a problem" to the final tense moments at Mission Control, Lost in Outer Space takes readers on the unbelievable journey of Apollo 13 and inside the minds of its famous and heroic astronauts. Complete with photographs of the crew and diagrams of the spacecraft, this is an up-close-and-personal look at one of the most thrilling survival stories of all time.
Tod Olson

--- - Had the spacecraft been hit by a fragment of an asteroid? At the speeds they were traveling it wouldn't take more than a pebble to blast a hole in the ship and start the nightmare scenario in motion. But if that's what happened, it would be over by now–and they were all still alive.

Still alive, but in some kind of trouble. Amber warning lights began to flash on the right side of the instrument panel. Something was wrong with the electrical system.

Haise and Swigert both tried to report at once.

A few seconds went by.

“This is Houston,” said the Capcom, “say again please.”

It was Lovell who answered this time. “Houston,” he said, “we've had a problem.”