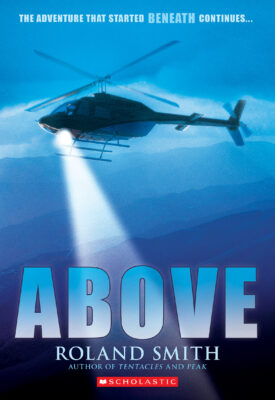 Pat O'Toole and his brother, Coop, are on the run from an enemy that specializes in hiding in plain sight. Along with their new companion, Kate, they've narrowly escaped a cultlike community situated beneath the streets of New York City. Kate has lived underground since birth, and the world above thrills her, but it's treacherous as well. With the cult's leader -- Kate's grandfather -- hatching a new scheme of global consequence, the three runaways may be the only ones who can stop him. Will they face him head-on, or will they spend the rest of their lives as fugitives?

The adventure that started Beneath concludes Above in this action-packed middle-grade thriller by Roland Smith!

--- - I reached for my shades, then changed my mind. I was above now. This is where I lived. I needed to get used to the light.

I passed the bus station, tensing a little as I walked by the people at the curb waiting for rides, or getting dropped off. No one paid attention to me. I was just a person with a backpack. A fellow traveler on a wintry day.

I began to smile. Everything would be okay . . . and that's when he stepped out in front of me.