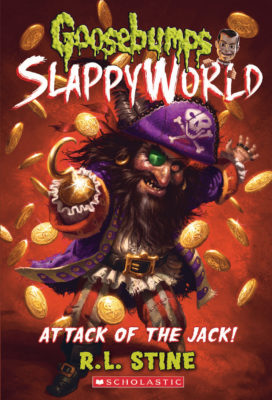 Attack of the Jack (Goosebumps SlappyWorld #2)

Devin and his sister Violet are visiting their Uncle Jack for the summer. He lives in an old house by the seashore. Jack was a sailor and he has collected strange and fascinating items from the sea. Exploring a back room, Devin and Violet discover a locked trunk. A pirate's chest. The trunk is wrapped in old, heavy chains and locked with a huge rusted lock. But they manage to get it open.

They lift the lid slowly-and see that it's filled with antique jack-in-the-boxes. Huh? One box is hidden under the others, covered in dust. It plays an odd unpleasant song. Up pops a very ugly, mean-looking puppet, an old pirate with a dirty red bandana over his long greasy hair, scars on his cheeks, and a beard, and one eye missing. "Thanks for letting Sailor Jack out!" he rasps, bouncing on his spring. Devin and Violet now face new and troubling questions: Will Jack return them to their uncle? Just how much is a pirate's promise worth?