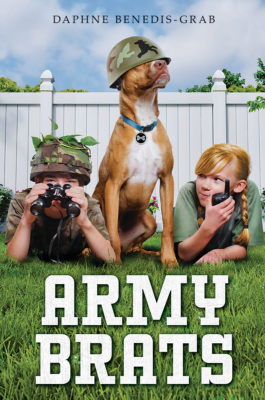 The Bailey kids' mom has just been assigned to Fort Patrick, and it'll be the family's first time living on an army base! Tom, Charlotte, and Rosie get to make new friends, explore the neighborhood, and cool off in the huge pool. Unfortunately, they also have to deal with the base bully, who seems determined to make Tom's life completely miserable by telling everyone he's a wimp.

When the Baileys discover a mystery on base--an abandoned building long rumored to be haunted--they know that this is the way to show the world how brave Tom truly is. But when they go to investigate, they find there's more to the house than some old rumors. What is that weird equipment? And who is that suspicious man sneaking around inside?

It's up to Charlotte, Tom, and Rosie to figure out the base's secrets-and prove to everyone that no bully can keep the Bailey kids down.

Daphne Benedis-Grab's Army Brats is an exciting romp that celebrates friendship, bravery, and being true to yourself.

Daphne Benedis-Grab is the author of the middle grade novel The Angel Tree and the young adult novel Alive and Well in Prague, New York. Her short stories have appeared in American Girl Magazine. She earned an MFA at The New School and is an adjunct professor at McDaniel College. She lives in New York City with her husband, two kids, and a cat who has been known to keep her computer warm while she is away from her desk. Visit her at daphnebg.com.