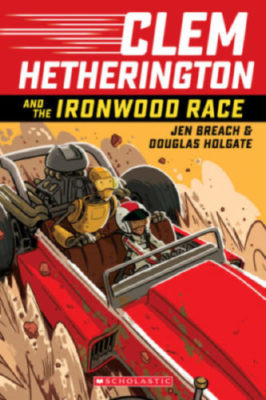 A dangerous rally race... and archaeology?!

Clementine Hetherington and her robot brother, Digory, have run away from the orphanage they've been living in since their parents died. Clem and Dig want to follow in their famous archaeologist mother's footsteps, but no one will take them seriously. Their chance arrives when a man from their past saves Digory's life, and to repay the debt they enter a multiday rally race... to recover stolen artifacts! Clem and Dig hope to win so they can give the artifacts to a museum, but their opponents want to sell them on the black market. The Ironwood Race has no rules, and Clem and Dig might be in over their heads!
Douglas Holgate

Douglas Holgate is the illustrator of Something's Amiss at the Zoo by Jen Breach. He is also the illustrator of The Last Kids on Earth series by Max Brallier and Wires and Nerve, Volume One by Marissa Meyer. Douglas lives in Melbourne, Australia, with his family. Visit him online at skullduggery.com.au.

Jen Breach is the author of Something's Amiss at the Zoo, which was illustrated by Douglas Holgate. She has received several grants, prizes, and fellowships for her work, and her essays have been featured in various publications. She gratefully acknowledges the support of the Australian Society of Authors and the Australia Council for the Arts. Jen is originally from Melbourne, Australia, and currently lives in Boston. Visit her online at www.jenbreach.com.