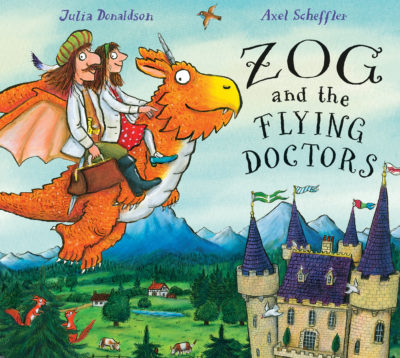 Zog and the Flying Doctors

Zog the dragon, Princess Pearl, and Sir Gadabout have taken to the skies! No sniffly lion or sunburned mermaid will go without care while the flying doctors are on duty. But Princess Pearl's unconventional career path doesn't sit so well with her uncle, the king. He thinks princesses should stay in their towers and embroider cushions all day!

When the king's mysterious illness befuddles all the royal doctors, however, it's Princess Pearl to the rescue! She not only heals the king -- she also changes his mind about what it means to be a princess.

The heroes of A Gold Star for Zog fly again in this story of the value of letting your talent shine, all told in Julia Donaldson's enchanting rhymes with Axel Scheffler's witty illustrations.
Julia Donaldson

Julia Donaldson served as the UK Children's Laureate from 2011 to 2013 and has written many bestselling and beloved picture books and novels for young readers. She lives in Glasgow, Scotland, with her husband, Malcolm.

Axel Scheffler's award-winning books include Room on the Broom, The Snail and the Whale, and The Gruffalo. His illustrations have been published in more than 30 countries. He lives in London, England.