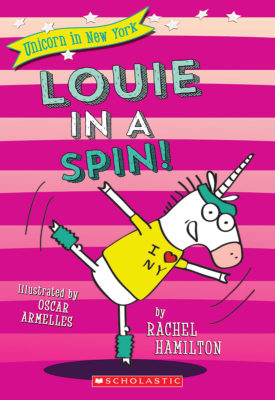 Louie the Unicorn is a star! At least, he will be once he polishes his act at performing arts school. With a song in his heart, a spring in his step, and an unwaveringly sunny outlook, he's about to take the big city by storm. It's time for this unicorn to shine!

Louie's school has dance fever! But Louie's moves aren't exactly graceful. His dance teacher doesn't know how she'll ever train a unicorn with two left feet. Lucky for her, Louie has hooves! But when Louie mistakenly gets entered into a HUGE state-wide dance contest, everyone at school worries he'll make them lose for sure. Louie's going to have to give it his all and shake what his mama gave him if they are going to stand a chance!
Rachel Hamilton

Rachel Hamilton is a graduate of both Oxford University and Cambridge University. She developed a passion for storytelling as an English teacher when she discovered it was the perfect way to get her students to stop talking and listen to her. She has written several books for young people, including The Case of the Exploding Brains. Rachel loves to make people laugh, especially when it's intentional rather than accidental. She divides her time between the UK and Dubai.