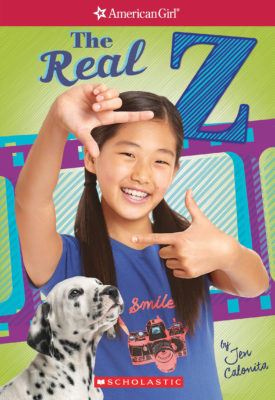 And action! Z knows what she's doing when it comes to making movies. She's an expert at stop-motion video. In this first book about the aspiring filmmaker, Z has to make a whole new kind of movie--a documentary--and it's harder than she thought. Z wants to wow the judges, but she's not sure her ideas are good enough for a film festival. With the help of her friends, Z shoots a lot of footage, but something about it doesn't feel right. Should she start over? As she tries to make a movie she can be proud of, Z discovers that to be a real filmmaker, she'll first have to be her real self.
Jen Calonita

Jen Calonita graduated from Boston College where she majored in communications. This degree helped her land a job at a teen magazine where she got to interview several of her favorite movie and music stars! These days, Jen writes books for teens, including the Secrets of My Hollywood Life series. When she isn't working, Jen loves going running, taking pictures, and hanging out with her husband and two boys at their home on Long Island in New York. She also enjoys going on walks with her feisty Chihuahua named Jack, where she does her best brainstorming for whatever project she's working on next. You can find her online at www.jencalonitaonline.com.