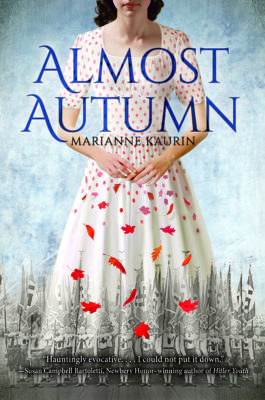 It's October 1942, in Oslo, Norway. Fifteen-year-old Ilse Stern is waiting to meet boy-next-door Hermann Rod for their first date. She was beginning to think he'd never ask her; she's had a crush on him for as long as she can remember.

But Hermann won't be able to make it tonight. What Ilse doesn't know is that Hermann is secretly working in the Resistance, helping Norwegian Jews flee the country to escape the Nazis. The work is exhausting and unpredictable, full of late nights and code words and lies to Hermann's parents, to his boss... to Ilse.

And as life under German occupation becomes even more difficult, particularly for Jewish families like the Sterns, the choices made become more important by the hour: To speak up or to look away? To stay or to flee? To act now or wait one more day?

In this internationally acclaimed debut, Marianne Kaurin recreates the atmosphere of secrecy and uncertainty in World War II Norway in a moving story of sorrow, chance, and first love.
Rosie Hedger

Marianne Kaurin was born in 1974 in Tonsberg, Norway. She studied at the Norwegian Institute of Children's Books, and her debut novel, Almost Autumn, received the Norwegian Ministry of Culture prize, and was named Young People's Book of the Year in a vote by students from all over Norway. Marianne now lives just outside of Oslo in Nesodden with her husband and three children, and is an editor of educational literature for high school students.

The large birch trees whisper in the wind. The streets seem wider than usual - ! ' there is less dust, less litter. There are four words in her head, four words that have popped up out of nowhere, like a chorus, a march: Everything starts this autumn. Everything starts this autumn. One, two, three, four. Everything starts this autumn. Something is waiting for her' - ! ' someone is waiting for her. The leaves may plummet from the treetops, the earth may become hard and impenetrable, the rain may fall and the wind may tear through the streets, and the war, the stupid war, it can carry on regardless, because she, Ilse Stern, fifteen and a half years old and in her summer dress and lipstick, she is heading for something warm and red that beats strong, and there is nothing that can stop her.
People sit chatting in Olaf Ryes Square, some on the grass and others on the green benches positioned in a semicircle around the fountain. Water continues to gurgle and the tall trees cast shadows over the open square where children play tag, running after one another as they laugh and squeal. It seems so long ago that she was one of them, a scruffy little city child with skinny pigtails, darting around in the streets and parks of Grunerlokka.
Ilse looks for a slender boy with fair, bristly hair and a gap between his front teeth, a boy with delicate, dry hands and a familiar stroll, a boy who smells like Hermann. He is nowhere to be seen. The wind rustles in the trees. She waits.'