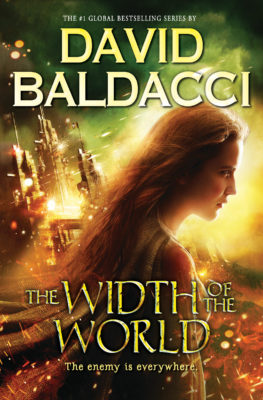 The Width of the World (Vega Jane, Book 3)

This is it. Vega Jane's time. She's been lied to her whole life, so she breaks away from Wormwood, the only home she's ever known, in search of the truth. She battles horrors to fight her way across the Quag with her best friend, Delph, and her mysterious canine, Harry Two. Against all odds, they survive unimaginable dangers and make it through.

And into a new world that's even worse. Not because deadly beasts roam the cobblestones, but because the people are enslaved but don't even know it. It's up to Vega, Delph, Harry Two and their new comrade, Petra, to take up the fight against a foe that's unrivaled in savagery and cunning. Not only is Vega's life and the lives of her friends on the line, but whether she triumphs or fails will determine whether a whole world survives.

Beloved author David Baldacci delivers a shockwave of destruction and shattering revelations in The Width of the World, book three in his instant #1 global bestselling Vega Jane series.
David Baldacci

"THE FINISHER is an enchanting romp through a fantastical world worthy of Rowling or Brooks. Baldacci proves that his pen can engage youth as well as adults." – Richard Paul Evans, #1 NEW YORK TIMES bestselling author of the Michael Vey series

“Vega Jane has stolen my heart. I’ve read several novels in the last few years with female protagonists and none of them are as amazing as Vega. . . . . Her adventures must be continued. To not do so would be a crime. This is the female protagonist I want my daughters to read and emulate.” - SciFi Pulse

"What happens when an international best-selling crime novelist tries his hand at a youth fantasy? Well, in this case, success." -- BOOKLIST, starred review

"Best known for his adult crime novels, Baldacci makes a detour into middle-grade with this wildly fanciful and darkly intriguing tale of a girl forced to fight for her life as she investigates the secrets of her tiny community.” -- PUBLISHERS WEEKLY'