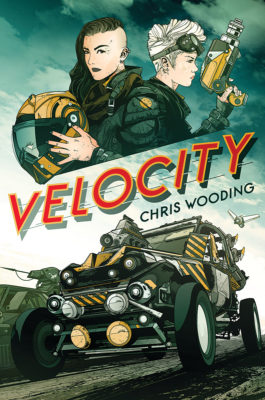 Buckle up for a fast-paced, high-octane thrill ride!

Cassica and Shiara are best friends. They couldn't be more different, but their differences work to their advantage -- especially when they're drag racing. Cassica is fearless and determined, making her the perfect driver for daring, photo-finish victories. Shiara is intelligent and creative, able to build cars out of scrap and formulate daring strategies from the passenger's seat.

Now they've set their sights on the Widowmaker -- the biggest, most anticipated, and most dangerous race of the year. The winners get a pass to a life of luxury and fame. The losers, more often than not, die in fiery explosions. And even if Cassica and Shiara survive the deadly three-day challenge... their friendship might be roadkill.

This breathless reimagining of extreme sports is perfect for fans of Mad Max: Fury Road and NASCAR.

Chris Wooding began writing at the age of 16, and his first novel, Crashing, was published when he was 19. Since that time, he's written dozens of novels in several genres, notably the award-winning The Haunting of Alaizabel Cray, Poison, Storm Thief, the Malice series, the graphic novel Pandemonium, Silver, and Velocity.

--- - The jump rushed toward them. Instinct made the choice for her. She twisted a dial, hit a switch. Everything to the turbos, all at once, one huge compressed burst of speed. Probably they'd blow the engine or backflip Maisie and land her on her roof, but either was better than falling short.

Cassica's thumb shifted to hover over the red button on the wheel grip. The lip of the jump charged at them, close enough now so Shiara could guess at the angle. She delayed another split second to compensate, then:

The word was barely formed before Cassica pressed down with her thumb. Maisie's turbos detonated with a sound like sudden thunder. The g-force shoved them back in their seats. Maisie hit the jump and the world tipped upward, and in that weightless moment Shiara had the cold clear thought that this sky might be the last she ever saw.