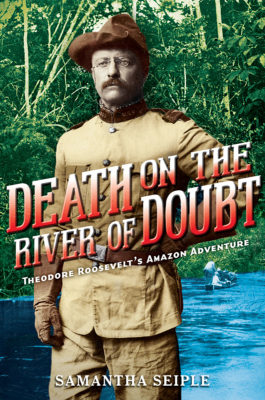 Death on the River of Doubt: Theodore Roosevelt's Amazon Adventure

"I did have a murderous trip down South, but it was mighty interesting."

In October 1913, Theodore Roosevelt arrived in Rio de Janeiro, Brazil, on a tour of South America. The thrill-seeking adventurer had no idea that he would soon receive an offer he couldn't refuse: the chance to lead an expedition deep into the Amazon jungle to chart an unmapped river with his son Kermit and renowned Brazilian explorer Candido Mariano da Silva Rondon.

Death on the River of Doubt takes readers inside the thrilling journey that unfolds as Roosevelt, Rondon, Kermit, and their companions navigate an unpredictable river through an unforgiving jungle. With new threats at every turn, from bloodthirsty piranhas and raging rapids to starvation, disease, and a traitor in their own ranks, it seems that not everyone will make it out alive.

Through it all, the indomitable Teddy Roosevelt remained determined to complete their mission and rewrite the map of the world. Or die trying.
Samantha Seiple

--- - Roosevelt had slammed his leg into a boulder, gouging his shin. As his blood oozed into the piranha-infested water, he quickly waded to the river's bank and limped back to the campsite at the foot of the rapids.

At first glance, the wound appeared to be minor. But the former president knew what a bloody gash to his leg really meant, especially in the unknown and unforgiving jungle.

Roosevelt was knocking on death's door.