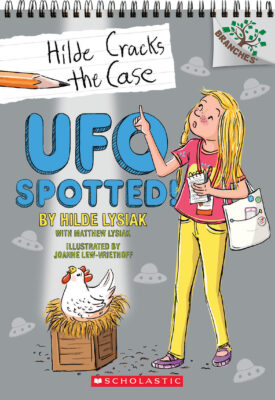 Real-life crime reporter Hilde Lysiak is starring in her very own early chapter book series -- inspired by real news stories she has written! In this fourth book, a UFO has been spotted in town! Everyone is convinced aliens are invading, but Hilde isn't so sure... Hilde and her sister/photographer, Izzy, interview witnesses and follow the facts. And they soon discover what looks like the wreckage of a spaceship! Hilde has cracked all sorts of cases, but how will she solve this one? It is truly out of this world! Joanne Lew-Vriethoff's personality-filled illustrations appear on every page, bringing Hilde's adventures to life for young readers!