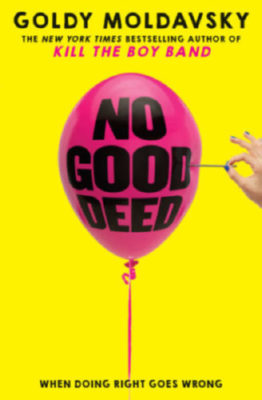 Gregor Maravilla doesn't want much. Just to feed all the starving children. That's why he goes to Camp Save the World, a summer program for teen activists who care about making a difference. What could be better?

It's almost perfect. Except some of these causes are kind of... strange. Like Eat Dirt -- a campaign started by up-and-coming actress Ashley Woodstone. Gregor wasn't a fan of her work before, and he's certain she's only there now because of her fame. But Gregor is determined to not let her ruin his experience.

And then the contest is announced. That's when the sabotage starts. They want to see who can do the most good. But that leads to the most bad.

Goldy Moldavsky writes YA fiction from her hometown of Brooklyn. She studied journalism in college, where she got to interview some cool celebrities for her school paper. After a bit she realized it'd be more fun making up stories about celebrities, so that's what she does in her writing. Some of her influences include Buffy the Vampire Slayer, the esteemed works of John Irving, and the Mexican telenovelas she grew up watching with her mother.