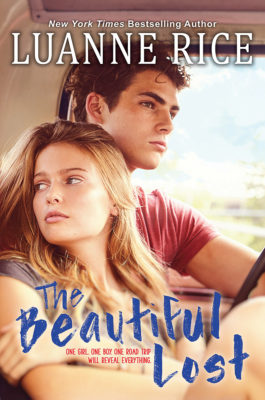 Here are three things to know about Maia:

1. Ever since her mother left, Maia's struggled with depression -- which once got so bad, she had to go to an institution for a while. She doesn't want to go back.

2. Maia's sure that if she finds her mother, if the two of them can talk about whale songs and constellations, then everything will be okay again.

3. She's in love with Billy, the handsome, brooding boy who lives in the group home in town. He doesn't seem to know that Maia exists... until now.

When Maia sets off on a road trip in search of her mom, Billy unexpectedly comes along. They drive up the East Coast, stopping along the way for lobster rolls and lighthouses. Maia learns that Billy has dark secrets of his own -- and wants to outrun his past, too. But what will the future hold if they reach their destination?

From internationally bestselling author Luanne Rice, this is a sweeping, stunning story about the surprising directions our hearts can take.
Luanne Rice

Luanne Rice is the New York Times bestselling author of 34 novels, which have been translated into 24 languages. The author of Dream Country, Beach Girls, The Secret Language of Sisters, and others, Rice often writes about love, family, nature, and the sea. She received the 2014 Connecticut Governor's Arts Award for excellence and lifetime achievement in the Literary Arts category. Several of Rice's novels have been adapted for television, including Crazy in Love for TNT, Blue Moon for CBS, Follow the Stars Home and Silver Bells for the Hallmark Hall of Fame, and Beach Girls for Lifetime. Rice is an avid environmentalist and advocate for families affected by domestic violence. She divides her time between New York City and Old Lyme, Connecticut. Visit her online at luannerice.net.

--- - The car running, I gripped the steering wheel hard with my elbows locked, just begging the stars to let him walk by. That's when I spotted him sitting alone under a maple tree, leaning against the wide trunk. And, as if the stars had decided to answer, he leapt up and came toward me. I got out of the car.

"What are you doing here?" he asked.

He looked in the back seat and saw my duffle.

"Where are you going?" he asked.

Our eyes burned into each other. I felt heat in my chest, knowing that this really was the last time. I wanted to reach over, touch his hand. I hoped he could read my mind and somehow know he was the only person I'd miss, that I'd come here today because he was, ineffably, mine.

I stared at him. Had I heard right? No, I had to be dreaming.

It was real. This was happening. His eyes were begging me.

"But people will miss you. They'll wonder where you are," I said.

"I live in a group home," he said, gesturing at the building. "They won't wonder for long."

And then he touched me -- just one finger on my wrist bone -- so quickly I would have thought I'd imagined it if it didn't tingle all through my body.

"Yeah, you're running away, right? I know how to do that. No one will catch us," he said. He was already hurrying around the car.

I didn't think after that. I climbed into the driver's seat, he got in beside me, and we sped off.