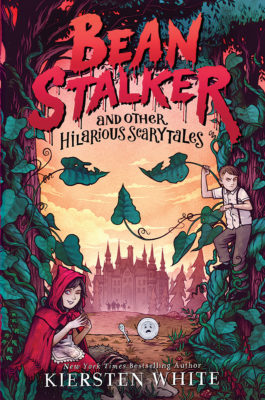 Once upon a time, a girl skipped into the forest and became a zombie.

Wait, no, that's not how this story is supposed to go. Let's try again.

Once upon a time, a boy did a horrible job as a sheep-sitter and burned his tongue on stolen pie.

No, children in these stories are always good and virtuous. From the top.

Once upon a time, a king and queen tried to find a princess for their son to marry, and he wound up fleeing from a group of very hairy vampires.

What about, once upon a time, a bunch of fairy tales got twisted around to be completely hilarious, a tiny bit icky, and delightfully spooky scarytales... in other words, exactly what fairy tales were meant to be. Grab some flaming torches, maybe don't accept that bowl of pease porridge, and get ready for a wickedly fun ride with acclaimed author Kiersten White and fairy tales like you've never heard them before.
Kiersten White

Kiersten White is the New York Times bestselling author of numerous novels for young adults. She lives with her family near the ocean in San Diego. While she spends most of her time in the sun, she still courts the occasional shadow. Visit her online at kierstenwhite.com.