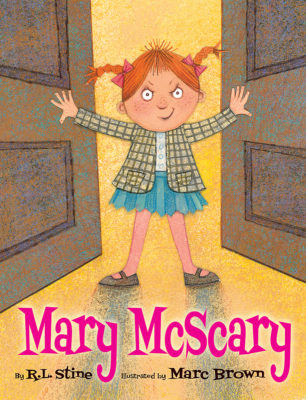 Meet Mary McScary. Mary likes to be scary. She scares her mom, her dad, her pets, and even a balloon! But there's just one person Mary can't scare -- her cousin, Harry McScary. He's not afraid of the usual things, like spiders, snakes, and other creepy crawlies. But Mary doesn't give up that easily, and one way or another she'll find a way to give Harry the scare of his life. . . Beware of Mary McScary!

Renowned bestselling children's book talents R.L. Stine, creator of the Goosebumps series, and Marc Brown, creator of the Arthur Adventure series, join forces once again in a spine-tingling, wildly funny picture book story featuring a fearless anti-heroine that will have kids and their parents cheering, "BOOOOOO!"

Marc Brown is the beloved creator of the bestselling Arthur Adventure book series and creative producer of PBS's Peabody and Emmy award-winning television series Arthur, now the longest-running children's animated show in history. He also has illustrated many other books for children, including the New York Times bestseller Wild About Books, as well as Mary McScary and The Little Shop of Monsters (2015), both written by R.L. Stine. For more information, visit marcbrownstudios.com.