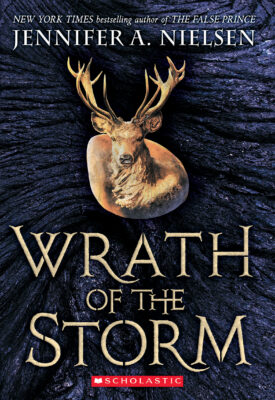 Wrath of the Storm (Mark of the Thief #3)

Trouble has a way of seeking out Nicolas Calva, and it's not likely to leave him alone any time soon. With Caesar's magic bulla, the Malice of Mars, and the possibility of a Jupiter Stone in play, all the powers of Rome are circling Nic. He'll have to maneuver his way through scheming government officials and reawakened magical beasts to save the Empire. Can he manage to keep his friends and family safe, claim his own freedom once and for all, and rescue the Empire -- before the magic gets the better of him?

With twists and turns on every page, critically acclaimed author Jennifer Nielsen weaves an epic, action-packed conclusion to her extraordinary Mark of the Thief trilogy.
Jennifer A. Nielsen

--- - I was still trapped, and I doubted the bulla could get thousands of pounds of rock and brick off me. But I knew something that could do it.

Magic can always sense other magic in the area, and I used that power to search for the Malice nearby.

The bulla had originally been given to Julius Caesar, filled with Venus's powers. Upon his death, Venus's power left the bulla, and Diana replaced the magic with her own, hoping it would be used in her war against the gods. The fact that I had the bulla and was using it to stop that war probably infuriated her.

As a rule, having a god furious with you is not a good thing. How well I understood that.

Nor did it help that I had the Malice . . . more or less. The Malice came from the god Mars with the power to end that war. To end any war, really. Use of the Malice guaranteed its bearer victory in battle.

If Diana resented my having the bulla, I could only imagine how she felt about the Malice. But she had no claim upon that amulet. I did. The key to finding it had been given to me. She'd have to destroy me to get it back.

What a pleasant way to begin a day – with the reminder that one of the gods had specifically targeted me for destruction.