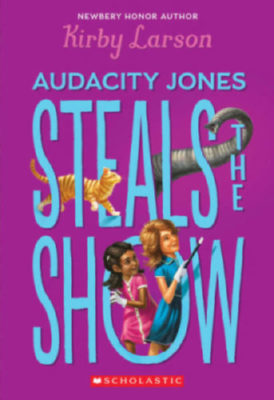 Audacity Jones and her best friend, Bimmy, are setting off from Miss Maisie's School for Wayward Girls on an extraordinary adventure! In the glittering city of New York, the girls meet Harry Houdini, the world's most famous magician, as he prepares a new spectacle: Houdini plans to make an elephant disappear from a crowded theater.

But Audacity and Bimmy discover a nefarious plot that puts Houdini's illusion in jeopardy. Who could be trying to sabotage the master magician? Audie will need all her smarts, the help of friends new and old, and even her best juggling skills to solve this mystery. Will she manage to save the show in time?

Newbery Honor author Kirby Larson brings readers a magical romp of a mystery that will delight and thrill to the very last page.
Kirby Larson

--- - ! 'If you, dear reader, have not this very day observed at least three instances of the magical, the mysterious, or the miraculous, do set this book down right away. Find a story more to your disposition. Perhaps something about chalk.

"Though Cypher has assured us this assignment will be nothing but run of the mill, Beatrice has advised that I not go alone." Here, Audie omitted a significant detail: since the recent communication from Cypher, her ear had been buzzing to beat the band. You, Dear Reader, might imagine a buzzing ear a mere inconvenience. But in Audie''s case, it was a warning. That buzzing ear had alerted her many times to potential dangers, including her parents'' ill-advised and ill-fated safari in the Dutch East Indies.

Audie smiled at her bosom friend. "And Bimmy has agreed to accompany me."

Bimmy returned the smile, though it did not completely cover her true feelings. She would, of course, be Audie''s willing companion no matter where they might go. But there seemed to be more to Audie''s invitation than met the eye. Bimmy scolded herself for such thoughts' - ! ' if Audie was holding something in reserve, keeping a secret, there was an impeccable reason for doing so. "It''s an honor, of course," she said.'