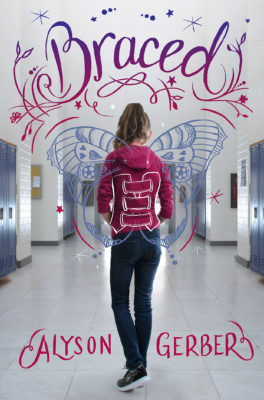 Rachel Brooks is excited for the new school year. She's finally earned a place as a forward on her soccer team. Her best friends make everything fun. And she really likes Tate, and she's pretty sure he likes her back. After one last appointment with her scoliosis doctor, this will be her best year yet.

Then the doctor delivers some terrible news: The sideways curve in Rachel's spine has gotten worse, and she needs to wear a back brace twenty-three hours a day. The brace wraps her in hard plastic from shoulder blades to hips. It changes how her clothes fit, how she kicks a ball, and how everyone sees her -- even her friends and Tate. But as Rachel confronts all the challenges the brace presents, the biggest change of all may lie in how she sees herself.

Written by a debut author who wore a brace of her own, Braced is the inspiring, heartfelt story of a girl learning to manage the many curves life throws her way.
Alyson Gerber

Alyson Gerber wore a back brace for scoliosis from the ages of 11 to 13, an experience that led directly to Braced, her first novel. She received her MFA in Writing for Children from the New School, and her essays have been published in everything from Chicken Soup for the Soul: The Magic of Mothers & Daughters to romance-advice websites. She lives with her husband in Brooklyn, New York. Please visit her on the web at alysongerber.com and on Twitter at @alysongerber.

--- - From Braced:
The door opens, and Jules is standing there holding my brace. "It was made just for you," she says, like that's a good thing. Only I'm looking right at it, so I know it's definitely not.

The brace is so much bigger than the sample she showed me. It's huge and thick and bright white, with uneven layers of padding on the inside and ventilation holes scattered across the torso that make it look like a machine. I can tell right away that it isn't meant for just my back. On the right side, it goes all the way up to my armpit and dips far down below my underwear, covering part of my thigh. It's longer in the back than in the front, like it has a built-in tail. Fake plastic hips on both sides stick way out. I don't even have real hips yet. On the back, three Velcro straps as wide as my forearm rattle their metal clasps every time Jules moves. It's going to make me look wide and weird, like I swallowed a bathtub.

Jules hands it to me. It's heavier than I expect, and I need both hands to hold it. It slips out of my fingers and crashes to the floor.

"Rachel," Mom says. "You need to take care of your brace. It's important."

She shakes her head.

"Why don't we give it a try?" Jules asks, picking the brace up off the floor.

I bite down on my lip and do my best not to look directly at it. It's going to be fine. It has to be.