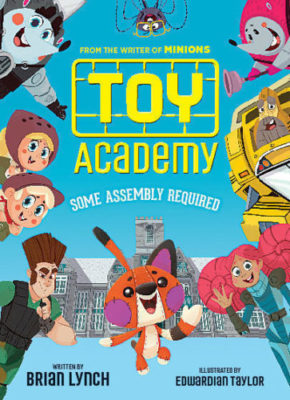 Perfect for fans of Dog Man!

Welcome to Toy Academy: where toys learn to play. This is where action figures train to battle, stuffed animals study the art of the hug, and collectibles practice standing very, very still.

Grumbolt isn't really any of those things. Lopsided and handmade, he doesn't know what he is or where he belongs! But when the Evil Toy Academy threatens to bring down his school, it's up to Grumbolt to go where no good toy has gone before and prove he's truly a great toy after all.

This laugh-out-loud chapter book by Brian Lynch, the writer of Minions and a writer of The Secret Life of Pets, is a classic in the making.

Brian Lynch is a screenwriter whose work includes the movies The Secret Life of Pets, Minions, Puss in Boots, and Hop. He has also written the comic books Monster Motors, Bill & Ted's Most Triumphant Return, Spike, and Angel: After the Fall. He currently lives in Los Angeles with his wife and son. He firmly believes that the greatest toy is either an Adventure People Daredevil Skydiver or Shipwreck from G.I. Joe.

Edwardian Taylor works as a freelance visual development artist for mobile games, TV, films, and commercials in Dallas, Texas. He is the illustrator of the Toy Academy series, written by Brian Lynch, as well as the illustrator of the picture books Race!, written by Sue Douglass Fliess, and It's Not Jack and the Beanstalk, written by Josh Funk. Learn more about him at edwardiantaylor.com and follow him on Twitter, Instagram, and Tumblr @edwardiantaylor.